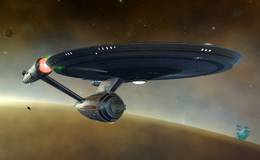 The Constitution-class Miracle Worker Flight Deck Carrier is a Tier 6 Flight Deck Carrier which may be flown by Starfleet characters, including Federation-aligned Romulan Republic and Dominion characters. All faction restrictions of this starship can be removed by having a level 65 KDF character or by purchasing the Cross Faction Flying unlock from the Zen Store. This starship can be used from any level upon completion of the tutorial experience. As you level up, this ship gains additional hull, weapon slots, and console slots.

At the heart of every Constitution-class vessel is a Chief Engineer working miracles, and this vessel was designed to make such an engineer feel right at home. A combination of advancements in miniaturization and efficiency optimizations have compounded in the years since the original superstructure was laid down, leading the ship to run with a very healthy surplus of power. A portion of this surplus has been dedicated towards an experiment in weapons inter-linking. Other improvements in miniaturization have resulted in a significant amount of space being freed up to expand the ship’s already generous hangar bays.

These fighters come equipped several Micro Phaser Beam Arrays and Emergency Power to Weapons. They can be equipped on any starship.

The Advanced variant of these Tactical Flyers can be obtained from the Dilithium Store, while the Elite variant is obtainable from the Fleet Starbase with an unlocked Tier V Communications Array.

As a Miracle Worker vessel, the Constitution Miracle Worker Flight Deck Carrier is fitted with a versatile Universal Console equipment slot which can hold any Engineering, Science, Tactical, or Universal console. This is an additional Console slot, above and beyond the standard allotment for ships of the same Tier.