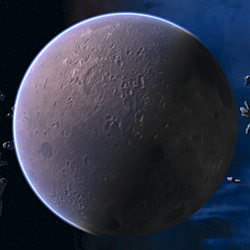 Crateris is a planet in the Crateris System of the Azure Sector. It became the new Reman homeworld after the destruction of Remus in 2387 by the Hobus supernova.

Being rich in dilithium and decalithium, Crateris was offered to the Remans by the Romulans in 2386 when it became apparent that Remus could no longer be mined without risking disaster. Remus was destroyed by the Hobus supernova the following year. While establishing and maintaining agriculture is extremely difficult, the planet is rich in mineral resources, which the Remans mine and trade for food and other supplies needed to sustain the colony.