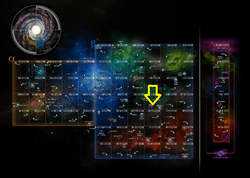 The Crateris System (also Gamma Crateris) is a system located in the Azure Sector of the Beta Quadrant.

Its primary planet is Crateris, which was settled by Remans in 2386 and became their new homeworld following the destruction of Remus in 2387.

Crateris was the site of a failed Romulan colony. The Remans were relocated to this planet from Romulus and Remus in 2386. The Remans consider Crateris to be a vast improvement over Remus because the planet is in a captured rotation allowing a hemisphere to stay in perpetual twilight.