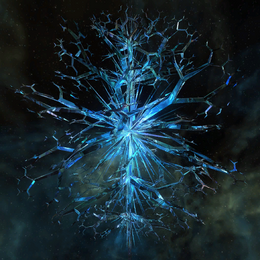 For the mission description of the Fleet Action, see: “Crystalline Catastrophe”.

The Crystalline Entity is a massive spaceborne cosmozoan that can be found in the Teneebia Sector. It can travel at warp speeds and sustains itself by consuming organic material using a Matter Conversion Beam.

Neither the Crystalline Entity nor any of the fragments it spawns have any shields, subsystems, or power levels. As a consequence, the Crystalline Entity and its fragments are totally immune to the normal effects of Boarding Parties, Viral Matrix, Charged Particle Burst, Tachyon Beam, Tyken's Rift, and Directed Energy Modulation. (See below however the special use of some of these abilities to counter the Entities re-crystallizing buff.) Phaser, tetryon, and polaron energy weapons will do their normal DPS on this mission, but their Procs have no effect. Similarly, transphasic projectiles will do their normal DPS, but their shield penetrating abilities are useless against the Entity and its fragments.

Jam Sensors, Scramble Sensors and other similar effects do not affect the Entity, but will "befuddle" Large Fragments.

If a Large Crystalline Fragment shatters on a player, it will spawn three Small Crystalline Fragments. The small fragments then travel back to the Entity, where they adhere to its surface and "Re-Crystallize" it. The re-crystallization bestows a stacking damage buff on the Entity. A few abilities that are typically used to drain enemy shields and subsystem power, have proven effective in breaking down newly-formed crystals along the Entity's surface. The following abilities will periodically remove multiple Re-Crystallize charges from the Entity:

A large amount of advice on how to complete the mission is given out in dialog boxes with Admiral Grigori Yanishev at the mission's outset. The dialog advice can be found listed under the mission description for “Crystalline Catastrophe”.