As a MMORPG, Star Trek Online is not only about combat and the optimization of combat, but about allowing the player to create their customized experience as a captain within the Star Trek universe. This expresses itself through the appearance of their captain, crew and ship (informally referred to by some as "Space Barbie"). The multiplayer element of the game also encourages social interaction between players both on missions and in social environments.

The tailor offers free customization of characters and officers

Via the tailor, players are able to customise the appearance of their captain and bridge officers for free within the confines of the character's race and gender. It is possible to recruit special bridge officers from races not available to captains, such as Breen. The Alien species allows for the broadest range of customization for the captain's physique, allowing the player the recreate aliens not otherwise available to play (such as Vorta).

A wide selection of uniforms and outfits are available for free and from missions while many more can be purchased from the Zen Store, Lobi Crystal Consortium, Fleet holdings and event stores. These range from most canon uniforms throughout the show's history (from movie-era Excursion Jacket to Mudd's Discovery attire) to casual off duty attire such as swimwear.

Beyond uniforms, Holo Emitters can also be applied for unique appearances. 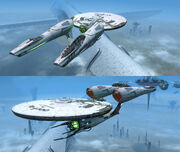 The look of starships can be heavily customized

A huge array of playable starships are available, including nearly every Federation starship seen on screen and a host of alien ships from every series. Many of these ships come in different variants and can be "kitbashed" together. For example, the Galaxy class has seven variants. The warp nacelles of one variant can be combined with the saucer of another and the secondary hull of a third (note, there are some limitations on how some parts can be kitbashed depending on the ship you are flying).

Once you have your parts, different Hull Materials and windows can be applied, and colored markings added. With some ships, the logo of your fleet can be displayed.

Certain ship equipment applies additional visuals that can be enabled or disabled. Visual Slots can be used to show these looks while using different equipment. The image to the right shows the visuals of the Assimilated Borg Technology applied to a Kelvin Constitution Heavy Command Cruiser.

Starships also have Ship Interiors (limited to bridges on console) which can be swapped around. These allow a captain to explore their ship, interact with crew for duty officer assignments and, in some cases, display earned trophies in their ready room or mess hall.

Emotes can be used to interact with players

Emotes are character and ship animations that can be triggered by the player, including dance moves needed for “Dance Party!” and “Nimbus Dance Competition”. They can either be accessed via the icon in the bottom right of the chat window, then the emote option. This menu can be pinned to the screen and expanded. A few space emotes are audio triggers rather than visual ones.

Titles appear above the player character's head on ground missions, visible to others. Many titles can be earned throughout the game (often tied to accolades and can be switched between by accessing the Character Status, Edit Record, and Title options. Titles include "Veteran", "Spider's Bane" or "Moist".

Pets can accompany your captain on ground and space maps

Pets come in combat and non-combat variants, available in both space and ground. Non-combat examples include the Horta Hatchling as a ground pet and the Gekli Companion in space. These will despawn while in combat. Combat pets on the other hand are triggered to aid you in battle.

Pets can be earned in missions, bought from stores or earned when buying its related Small Craft.

Social zones such as Deep Space Nine or Risa allow players to hang out together in a non-combat environment and talk. They can hold events (often organized by fleets) and also roleplay (common in DS9 instance #1).

The Subspace Party Amplifier is a social device that causes ever character and NPC in its vicinity to break into a dance party. Baseball is a different kind of social device where players can throw baseballs between each other to generate a buff. Fireworks cause fireworks on space maps to celebrate, though does not animate players.