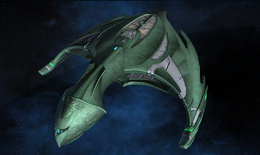 This article is about the playable starship. For NPC vessel, see D'deridex Battlecruiser.

The D'Khellra-class Warbird Battlecruiser is a Tier 6 Warbird Battlecruiser which may be flown by Romulan Republic characters, as well as characters of any other faction. All faction restrictions of this starship can be removed by having a level 65 KDF character or by purchasing the Cross Faction Flying unlock from the Zen Store. This starship can be used from any level upon completion of the tutorial experience. As you level up, this ship gains additional hull, weapon slots, and console slots.

. This ship can be purchased individually, or as part of the Cross Faction Cruiser Bundle [T6] for 6,000

. It is also available as part of the following: the Romulan Fleet Admiral Faction Pack for 5,000

The D'deridex-class Warbird Battle Cruiser was the foundation of the Romulan Star Empire's forces in the 24th Century. Drastically heavier than the T'liss Light Warbird and Dhelan Warbird, the D'deridex class is significantly more resilient and carries firepower comparable to a Starfleet's Galaxy-class starship.

The D'deridex class has been at the forefront of Romulan contact with other species, and vessels of this class acted as battleships during the Dominion War.

Following the success of new ships developed for Operation: Delta Rising, engineering teams at Mol'Rihan began work on updating core ship designs in the Republic's fleet that would combine the best of Romulan construction with new ideas from Republic engineers and technical improvements suggested by the Republic's allies.

The D'Khellra-class Warbird Battlecruiser is the first ship from this effort to be released to Republic captains. An update of the feared D'deridex-class Retrofit that was the mainstay of the Romulan Star Empire's fleets in the late-24th century, the D’Khellra class incorporates updated technology developed to give this ship improved capabilities for the difficult challenges the Republic faces in the months ahead.

The D'Khellra-class Warbird Battlecruiser has a battle cloak that allows the ship to cloak during combat, granting stealth and a damage bonus upon decloaking.

As a Romulan Warbird, the D'Khellra-class Warbird Battlecruiser comes with built-in Singularity abilities. These abilities do not automatically rank up when acquiring higher tier Warbirds. These powers build in severity based on the charge built up by the ship's Singularity Core.

By using an [Experimental Ship Upgrade Token], the D'Khellra-class Warbird Battlecruiser may be upgraded to T6-X, unlocking an extra ship device slot, universal console slot, and the ability to slot an extra starship trait.