This is for the NPC ship. You may be looking for the playable D'Kora Class Marauder. 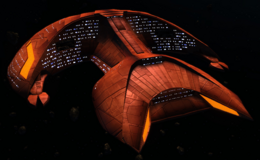 The D'Kora-class (also known as the Ferengi Marauder) is a type of cruiser operated by the Ferengi Alliance. They are primarily used as freighters and mobile stores for Ferengi entrepreneurs. Ships of this class are frequently seen in the Sirius Sector Block.

When operating in Federation space at least some D'Kora-class ships feature the SS registry for civilian ships.