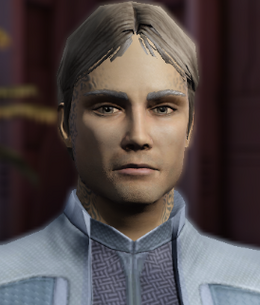 Damar Kahn is a Joined Trill scientist who is the seventh host to the Kahn symbiont. His predecessor, Lenara Kahn, was working to create artificial wormholes; Kahn claims that most of his hosts have been scientists. Damar studies the effects of supernovae, leading to his interest in the Hobus System.

In 2387, the star in the Hobus system went supernova. The resulting explosion devastated the planets in the system, of course, but then it created a chain reaction that cut a path of destruction more than 500 light years long.

More than a dozen systems were affected by the Hobus event, most notably the Romulus system. Both Romulus and Remus were destroyed. Billions lost their lives.

The thing is, a M-class planet like Romulus should have been protected by its stellar magnetosphere and its planetary magnetic field. They act like shields to protect the planet from radiation, and a supernova blast is highly energetic radiation.

If the supernova is large enough, it will overwhelm those defenses, but the Romuluans should have had decades to prepare for the wave's arrival. As it was, they only had hours.

Ambassador Spock attempted to organize an evacuation, but the Romulan Senate refused. I guess they thought they had more ... time.

That was a horrible time. Ambassador Spock had a plan to stop the wave, but after the destruction, a Romulan named Nero blamed him. Nero had a ship of awesome power. We still don't know everything about the Narada, but we think the Romulans used Borg technology to create it.

Nero destroyed dozens of our ships, and even attacked a Klingon fleet led by General Worf. I hear Worf barely survived.

Ultimately, Nero confronted Spock in the Hobus system. Spock managed to use Red Matter to create an artificial singularity to contain the worst of the supernova's blast, but both he and Nero were lost.

In a word, troubled.

Sela rules what remains of the Star Empire, and isn't shy about using the Tal Shiar and the military to bring systems back into the fold.

Meanwhile, D'Tan and his Unificationists have formed the Romulan Republic. The Federation and the Klingons recently recognized them at Khitomer, while Empress Sela and her allies expressed their disapproval... violently. Tensions remain high.

The Remans have formed a resistance movement in response to Imperial persecution. There's a lot of bad blood between Remans and Romulans... that could end rather poorly.

Even more troubling are reports concerning Taris, the former Imperial Praetor. She was ousted from power by Sela, and rumor has it she's seeking powerful allies from both within the Empire... and without. Sela made a lot of enemies over the years; this could be their chance to settle old scores.

The Romulans are touchy ... watch what you say or you'll be in for a fight. The Reman's don't even bother talking before they fire, so I think they're more dangerous than the Romulans. Sela's found some new allies, too. They're from the Delta Quadrant, but I don't know much about them.