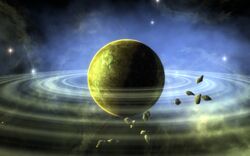 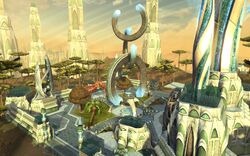 The city on the planet's surface

Defera Prime is a planet in the Defera System and homeworld of the Deferi. It has no moon but does have a partial asteroid field on its 'eastern' side. Ship and satellite debris can be found throughout this small asteroid field. On initial contact, Deferi Space Security will query unknown ships. Defera is a lush and vibrant world, featuring diverse plant life. Approximately 3.8 billion Deferi live on the surface. Alien visitors are beamed down at the southern portal of Defera's most ancient settlement.

The visitor center is a walled, square social area. The western portal leads to the glider park and a small building in the northwest. Nearby an old Preserver ruin can be found when leaving the center via the southern and eastern portal. From afar a Deferi metropolis is visible and the sky is populated by Deferi Shuttles and many Deferi are walking through the center. A high spire with holographic extensions can be found in the nothern part of the center and Ambassador Surah welcomes every visitor at the stairs in front of it. The central part of the compound consists of a plaza encircled by a water trench and can be reached by walking over any of the four bridges spanning over the water. In addition, holographic interfaces are spread across the center and some plants thrive within the walls aswell.