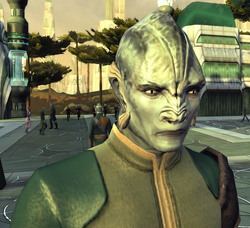 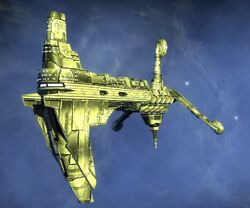 Originating from Defera in the Defera System, the Deferi are a neutral non-playable faction in Star Trek Online.

The Deferi play an important role in the Cold War Feature Series, where they are endangered by the Breen. They are also under threat from the Borg, with the Deferi homeworld facing direct invasion by the Collective.

Deferi have a range of light green skin tones. Their skull cranium is pronounced, while the nose is relatively flat for humanoid species. Females and Males differ in some regards. While Males seem to have reptilian slit eyes, Females have more humanoid looking pupils. Also, females have a very pronounced bony ridge on their foreheads, spanning from the nose bridge up to the cranium.

The Deferi hold equality in high esteem. In fact their ideology is based on the Balance, a universal value they strive for with every action they take.

Deferi space is home to ruins from an ancient race called the Preservers. This humanoid species is apparently the origin of the abundance of humanoid species in the Milky Way. Their advanced technology is what attracts the Breen to Deferi worlds, although up to now, neither the Deferi nor anyone else has learned how, or if, this knowledge can be recovered.

The Deferi aided the fleet of Klingon Chancellor Mow'ga when it was damaged exploring the Badlands. Since then they have maintained diplomatic relations with the Klingon Empire. They also participated in trade negotiations with the Federation, but until now they choose to remain neutral to both factions.

Government policies are based on polls, so the whole population is directly involved in all major decisions. Officials can always be instated and removed by majority votes as well.

To preserve balance, the Deferi have tried to keep to themselves and not to pursue an affiliation with any major power. However, the growing population on Defera has forced the Deferi to expand and become a space-faring civilization. In turn, contact with other species has recently increased.