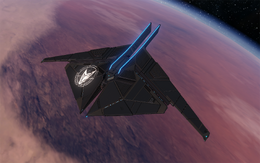 The Deimos-class Pilot Destroyer is a Tier 6 Destroyer which may be flown by Starfleet characters, including Federation-aligned Romulan Republic and Dominion characters. All faction restrictions of this starship can be removed by having a level 65 KDF character or by purchasing the Cross Faction Flying unlock from the Zen Store. This starship can be used from any level upon completion of the tutorial experience. As you level up, this ship gains additional hull, weapon slots, and console slots.

Players can obtain this starship as a ultra rare drop from the [Infinity Lock Box]; it comes in an [Infinity Prize Pack - T6 Ship] choice package, which is bound to you until a ship is chosen. The boxed ship is not bound and so may be traded to other players or bought and sold on the Exchange for energy credits under the name [Special Requisition Pack - Deimos Pilot Destroyer [T6]].

The A500 series of Synthetics was created to serve Starfleet. While not as advanced as a Soong-type android, and certainly lacking the interpersonal skills that Data would come to learn and display, the A500 was enough of a success that they were put to work throughout some of Starfleet's most dangerous jobs. There was even a ship designed for their use, mostly for transport and for defense of the Utopia Planitia Shipyards. Due to the synthetic nature of their operators, these ships are faster, more nimble, and more accurate than the counterparts designed to be run by other sentients.

Unfortunately, a fleet of these ships was used to conduct the assault on Utopia Planitia Shipyards in 2385. Due to their use in that attack, Starfleet halted their production and put them aside, until very recently. Starfleet Engineers have retrofitted these ships to operate with sentient controllers, without losing their agility.

The Deimos-class Pilot Destroyer comes with an Experimental Weapon slot. This additional slot does not fit standard weapons. Unlike standard starship weapons, Experimental weapons are not affected by weapon firing modes, such as those granted by bridge officer abilities.
This vessel comes equipped with the [Experimental Kinetic Feedback Matrix], which deals heavy kinetic damage to a target. Subsequent hits on the same target will grant a boost to Energy Weapon Haste. It has a 180 degree targeting arc.

By using an [Experimental Ship Upgrade Token], the Deimos-class Pilot Destroyer may be upgraded to T6-X, unlocking an extra ship device slot, universal console slot, and the ability to slot an extra starship trait.