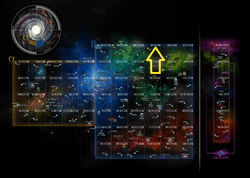 The Delta Corvi System is a system located in the Lirss Sector of the Beta Quadrant.

Called "Algorab" by some of its residents, the Delta Corvi system has twin stars – a Class B primary star with a Class K companion. Approximately 38,000 people have settled on the only M-Class planet in the system in the past 20 years, and more than 90 percent of the population is Romulan. The largest settlement on the planet, Algorab City, is in a series of canyons that shelter it from the intense rays of the suns.