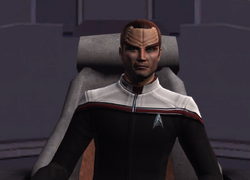 Denobulans are a bipedal humanoid species similar to Humans and native to the planet Denobula in the Denobula Triaxa System. Their physiological differences are mostly obvious on their faces which have two sets of ridges running down on either side of their forehead and around the eye socket. Their brow is also more prominent and they have a faint crease running from the center of their brow up the middle of their forehead.

Denobulan families are very large as males and females typically have more than one partner due to non-exclusive marriages and a very long life span. They require next to no sleep but do hibernate for up to 6 days each year. Currently, they are neither a playable race, nor available as Bridge or Duty officers in Star Trek Online . Denobulan face options are available to alien characters and to customizable Holographic Bridge officers such as the Engineering Holographic Officer .