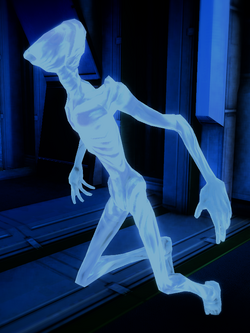 "We hunger! We must feed!" - Shrouded Phantasm in “Night of the Comet”

Devidians are life forms that feed off neural energy and live out of phase, making them undetectable by 23rd century Federation technology. They are associated with triolic radiation and use psychic energy attacks.

Devidians are the main antagonists of the Featured Episodes Series 2, taking place in the Klingon Empire Neutral Zone.

The most significant characteristic of the Devidians is that they exist slightly out of phase with the rest of the universe. Devidians have a basically humanoid shape, featuring a torso with a head and pairs of arms and legs. They're delicately built and always hover above the ground, never touching it. The head is completely different from other humanoid species: From the side it looks like an inverse "L" and has only one opening, featuring no discernible eyes or ears. This opening is the mouth and serves to suck the life force from the Devidian's victims. Devidians appear whitish-transparent with a discreet purple, fluid-like pattern on their skin. They can use their hands to punch and do not fall to the ground when knocked back. Their only known form of sustenance is neural energy they suck from humanoid species, preferably Humans. Devidians require triolic waves for survival.

Little is known about the Devidians' culture. They're driven by their hunger for neural energy and act unscrupulously, killing people without remorse. Moreover, Devidians conduct time travel in a reckless way, risking severe changes of the timeline. Devidians wear neither clothes nor other obvious ornaments on their bodies. At least the Shrouded Phantasm is willing to and capable of verbally communicating with other species. Devidians have a hierarchical structure, with the Shrouded Phantasm appearing as the leader.

The Devidian invasion force is lead by the Shrouded Phantasm who is probably the leader of its people. He, she or it ensures that the Devidians find feeding grounds anywhere and anytime and is equally driven by their hunger for neural energy.