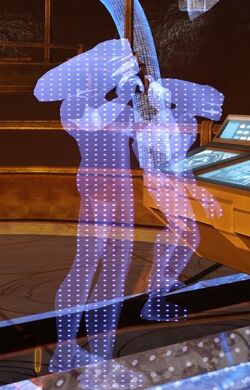 The only images of Dewans in existence are from ancient holograms

The Dewans were a species that lived on the planet Dewa III hundreds of millennia ago. After their Iconian overlords disappeared, the Dewans built a great civilization on the planet, but went extinct approximately 150,000 years ago. By the 24th Century, Federation scientists had studied their language, identifying it to be similar to that of the Iconians, Iccobar, and Dinasians.