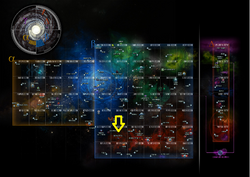 The Donatu System is a system located in the Donatu Sector of the Beta Quadrant.

Donatu is located on the edge of the Beta Quadrant, at the border between Klingon and Federation space. The system boasts five worlds, of which Donatu V is class M. Donatu has thus been the site of many clashes between the two galactic powers, stretching as far back as the 23rd century.