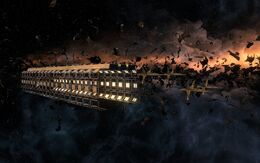 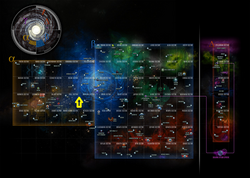 The Draylon System is a system located in the Trill Sector of the Alpha Quadrant.

During the Dominion War, Dominion forces began dumping scrapped vessels and other space debris into the Draylon system. The field of refuse grew throughout the war until the Dominion abandoned it after the signing of the Treaty of Bajor.

Cardassian ships have plundered the field for recyclable materials, but the rest remains until Starfleet has the resources to mount a major clean-up operation. Until then, Starfleet Command has found a use for the area as a site for training exercises that are too dangerous to be held near populated worlds.