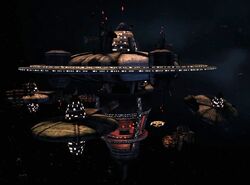 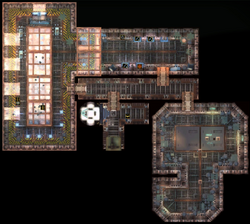 Drozana Station is a former Federation space station in the Donatu Sector of the Beta Quadrant, which is now operated by the Ferengi.

Drozana Station is an old Federation deep space station located in the midst of the Federation-Klingon neutral zone. Over a century of warfare has taken its toll on the station, which has changed hands many times. It is currently a dilapidated trading hub managed by Ferengi.

Dating back to the 23rd Century, Drozana Station was built as a Federation Deep Space Station and still runs on a duotronic computer core. By 2409, Drozana Station had been abandoned by Starfleet and the Ferengi took over the installation. Due to its location in the Klingon Neutral Zone, the station was a neutral ground for KDF and Starfleet officers to meet eye-to-eye during the Federation-Klingon War.

The proximity to Driffen's Comet also made it the hotspot of a Devidian incursion in 2409. The comet was destroyed during a Black Operation involving time travel to 2265, thus preventing the Devidians from using the comet's triolic energy to phase shift the Donatu Sector into their realm.

Gallery of pre-Legacy of Romulus interior[]