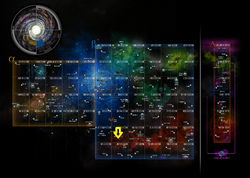 The Drozana System is a system located in the Donatu Sector of the Beta Quadrant. It is home to Drozana Station, a space station owned by a Ferengi named Belan.

Drozana Station is an old Federation deep space station located in the midst of the Federation-Klingon neutral zone. Over a century of warfare has taken its toll on the station, which has changed hands many times. It is currently a dilapidated trading hub managed by Ferengi.

Starships in the Drozana System[]

In addition to player vessels, several NPC starships can also be seen in the space near the station. These include the following: