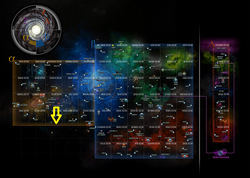 The Dubhe System is a system located in the Dubhe Sector of the Alpha Quadrant.

The Dubhe system was the site of one of the largest battles between the Maquis and Cardassian forces. In 2373, a fleet of Maquis ships moving through the area en route to Minos Korva were ambushed by a much larger Dominion force. The Maquis were routed in a battle that is now considered to be the beginning of the end of their insurrection.