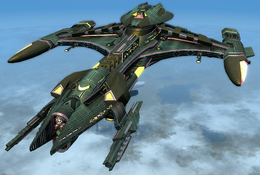 The Duvqu'-class Heavy Destroyer is a Tier 6 Destroyer which may be flown by Klingon Defense Force characters. The faction restrictions of this starship can be removed by having a level 65 KDF character or by purchasing the Cross Faction Flying unlock from the Zen Store. This starship can be used from any level upon completion of the tutorial experience. As you level up, this ship gains additional hull, weapon slots, and console slots.

The Starfleet Corps of Engineers and New Romulus Shipyards are not the only elite groups working on new starships. An engineering team at the Empire Shipyards have designed the Peghqu'-class Heavy Destroyer - a heavy ship with increased maneuverability that is nimble enough to outmaneuver a cruiser, but strong enough to take a barrage from an escort. Only experienced ship commanders with the backing of the High Council will have the chance to fly this ship.

The Duvqu'-class, similar to its T5 variant, fills a unique role in the Klingon fleet as it is more sturdy than a Bird-of-Prey, more maneuverable than a Battle Cruiser, and more flexible than a Raptor. The Battle Cloak gives it another huge advantage normally available only to more maneuverable (and fragile) Raiders on the KDF side, and Romulan Warbirds.

The Duvqu'-class Heavy Destroyer has a battle cloak that allows the ship to cloak during combat, granting stealth and a damage bonus upon decloaking.

The Duvqu'-class Heavy Destroyer comes with an Experimental Weapon slot. This additional slot does not fit standard weapons. Unlike standard starship weapons, Experimental weapons are not affected by weapon firing modes, such as those granted by bridge officer abilities.

The Duvqu' Heavy Destroyer comes equipped with the [Console - Universal - Enhanced Dynamic Tactical System] which allows the player to switch the Destroyer between Regenerative Mode and Tactical Mode.

By using an [Experimental Ship Upgrade Token], the Duvqu'-class Heavy Destroyer may be upgraded to T6-X, unlocking an extra ship device slot, universal console slot, and the ability to slot an extra starship trait.