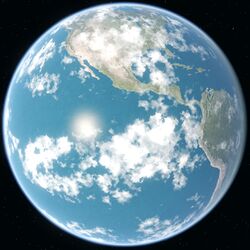 Earth (or Sol III) is the third planet of the Sol system. Earth is the home world of humanity and the seat of the government of the United Federation of Planets.

4.5 Billion years ago, Earth was seeded with humanoid life by the Preservers. The first actual life on Earth appeared 3.5 billion years ago, over time evolving into two sentient species, Voth and Humans. Several million years ago, the Voth left Earth, leaving Humanity to become the sole sentient, humanoid species on the planet.

Compared to their galactic neighbors, Humans began the exploration of space comparatively recently. They achieved powered atmospheric flight at the beginning of the 20th century, and rapidly progressed to short-range space flight based on chemical rocketry within the next 60 years.

In the 1960s, Humans started to explore their own solar system, including manned landings on Earth's satellite Luna. Over the next few decades, they also sent out numerous unmanned probes which landed on, flew by, or orbited Mars, Venus, and the other planets of the Sol System.

In 2063 humanity's first warp flight was conducted by Zefram Cochrane, leading to the First Contact between Vulcans and Humans. They quickly established a United Earth government and a number of offworld colonies. Earth operated a number of low-speed warp freighters under the Earth Cargo Authority, and later a military force was established, known as Starfleet, and based in San Francisco on the North American continent.

It was not until almost a century later, that Starfleet launched its first deep-space exploration vessel, Enterprise, which was capable of Warp 5. At this time, Starfleet also operated a number of slower ships used for short range military and exploratory operations and for planetary defense.

In the years following the launch of Enterprise, Earth began to play an increasingly important role in the politics of the Alpha and Beta Quadrant. By 2155 Earth had allied itself with Tellar, Vulcan, and Andoria, and made contact with the Klingon Empire. Earth and its allies also fought a war with the Romulan Star Empire in the 2150s.

In 2161 the anti-Romulan alliance became permanent as the United Federation of Planets, with the Earth city of Paris becoming its main seat of government, and Starfleet becoming the military arm of the Federation government. (Inscriptions at Starfleet Academy date its founding to this year, although the Academy was almost certainly established some years earlier.)

During the 23rd and 24th century several Starfleet facilities were built in Earth's orbit, including Earth Space Dock and the San Francisco Fleet Yards.

Even though Earth has been considered a peaceful, almost utopian world for centuries, the planet has come under severe threats by alien forces several times since the late 24th century. Most notably, the Borg tried to assimilate Earth in 2367 and 2373, and the planet was attacked by Breen forces during the Dominion War in 2375. In 2409 it is discovered that Earth is actively monitored by the Iconians, among several other planet in the Milky Way.