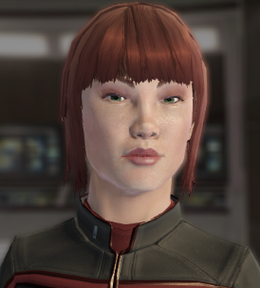 Elisa Flores is a cadet and the player's best friend at Starfleet Academy. Also being in the class of 2409, she gets assigned as tactical officer to the same ship as the player and, later, becomes the first bridge officer for players of the Federation. Captain Masc Taggart notes that her record at the Academy has "a few blemishes."