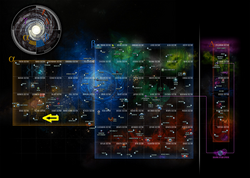 The Enocha System is a system located in the Algira Sector of the Alpha Quadrant.

Enocha Prime is a C-Class planet with a diameter of 17,047 km. It has a highly inclined orbit that takes it more than 4.4 billion kilometers from Alpha Enocha 66. The surface is covered with methane ice, and there are trace amounts of nitrogen and carbon monoxide. Core samples have revealed that more than 47 percent of the planet's mass is ice.

In 2409, on stardate 86927.78, the Belfast was patrolling in the Orias Sector to watch True Way movements in the region. Captain Shon reported that an abandoned Jem'Hadar vessel was found in the Enocha System while on a routine patrol. The origin of the dropped, decades-old ship remained a mystery to the crew, who boarded and secured the ship. Captain Shon himself visited the ghost ship. (Season 5 Dev Diary #6)