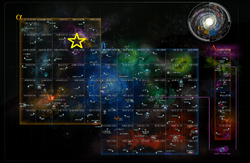 The Eta Serpentis System consists of three planets, of which the second one is inhabited. In the wake of Tzenkethi attacks, Klingon Defense Force built a starbase in its orbit to defend the inhabitants from a possible attack.