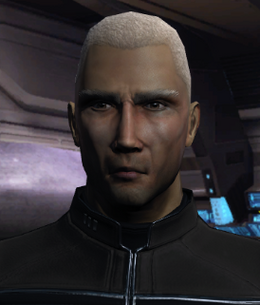 Commander Ethan Burgess is a Starfleet Intelligence officer working with Admiral Quinn on operations on the Klingon front in 2409.

Ethan grew up in London, which is also reflected in his British accent. He decided to join Starfleet after the Breen attack on Earth in 2375, as he realized that no place, not even Earth, is safe without people protecting it.