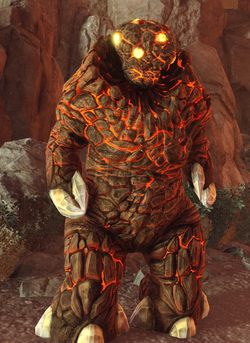 The Excalbians are a rock-like non-humanoid race with considerably immense powers of matter-energy manipulation. Whether these powers are natural or artificial in nature remains unknown.

Their civilization found the humanoid concept of "good" and "evil" alien and intriguing and wished to test the concepts through staged battle, with humanoids as unwilling participants. In the 23rd century, crew members of the U.S.S. Enterprise were forced to participate in one such spectacle. The forces of good emerged victorious, however the Excalbians were still uncertain whether good or evil was superior.

Finally in the year 2411 they decided to conduct another test between good and evil to reach a final, decisive ruling in the matter. After their own experiment turned on them they asked the forces of good to help save them from their own creations. Once again good was victorious and the Excalbians finally ruled in its favor. They then decided to reach out to other civilizations in the galaxy in the pursuit of peace now that they had dedicated themselves to the virtues of good rather than the vices of evil.

The Excalbians appear as solid rock, sometimes showing as a single boulder but able to form a roughly humanoid appearance with a head, legs and foreclaws.

Excalbians had the ability to generate huge simulated environments complete with individuals resembling historical figures. The simulacrums truly acted and believed they were who they appeared to be and appeared to share the same knowledge and abilities.