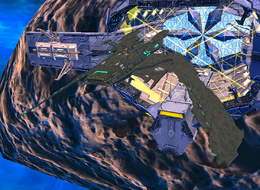 This page is for the NPC ship. For the playable starship, see Falchion Dreadnought Warbird.