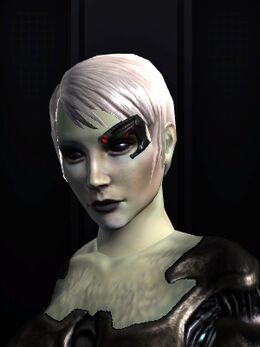 or by purchasing a Special Requisition Pack from the Exchange. It came bundled with the game for those players who pre-ordered the Amazon Collector's Edition, Amazon.co.uk Special Edition retail exclusive, or the Newegg.com Logitech bundle.

Note: Unlocking this candidate does not allow characters to claim the Klingon equivalent candidate, which must be purchased separately.

Rescued from the Borg, this officer will bring her experience as a Borg drone to your Bridge Crew!

Players who purchased this officer prior to Season 5, or received it via the Amazon pre-order / Logitech bundle can claim this item for every Federation character on their account from the "Legacy Unlocks" section of the Zen Store. It's received as a candidate and is bound.

Starting with Season 5, this officer became a single-character unlock when purchased from the Zen Store. The officer now comes packaged in a crate, which can be traded between characters, players, or sold on the exchange. When the crate is opened, the officer becomes a candidate and is bound to that character.