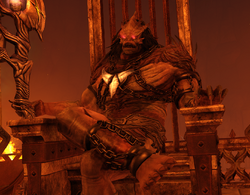 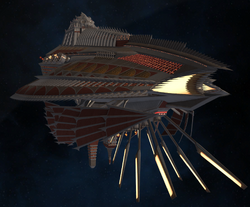 The Fek'Ihri Horde is the loose association of Fek'Ihri united under Molor. In Klingon mythology, they are the souls of Klingons who have dishonored themselves by pledging fealty to Molor in life. However now a modern incarnation has returned to plague the Empire.

According to Klingon mythology, Qo'noS was ruled by a tyrant named Molor 1,600 years ago. Molor was said to be so strong that no-one could oppose him, except for one: Kahless the Unforgettable. Kahless fought a war against Molor to end his reign of terror. Kahless and his mate Lady Lukara fought a legendary battle in the great hall of the city of Qam-Chee, when 500 of Molor's soldiers besieged the city. The city garrison fled, but Kahless and Lukara stood their ground and emerged victorious.

Kahless eventually killed Molor, wielding his newly forged sword; the sword that would become known as the Sword of Kahless, the first Bat'leth. From the ashes of Molor's kingdom, Kahless created the Klingon Empire, becoming its first emperor and the greatest warrior in Klingon history.

For Molor's dishonor his spirit was condemned to Gre'thor, to be imprisoned there for eternity. However, though he had been banished from the land of the living, Molor's influence endured. The wretched souls of the soldiers that pledged fealty to Molor in life had be reborn as the Fek'Ihri. These unnatural beasts are said to have been spat out of the darkest depths, feeding on despair and misery. For centuries Molor would plot his revenge, and the Fek'Ihri lay in wait at his bidding, growing ever stronger.

2,000 years ago, a Dominion research team, investigating the species of the Alpha and Beta Quadrants, were impressed by the Klingons, believing them to be potential for a new warrior class to replace the Jem'Hadar. In this, they used Klingon genetic material to breed a new species, taking inspiration from the Fek'Ihri mythos, and bound them with Ketracel White like the Jem'Hadar.

The Fek'Ihri somehow broke their addiction to the White, killing the Dominion research team. Instead, they found and joined forces with Molor. The price of their freedom from the White was, however, insanity. The Dominion abandoned the project and hoped the Klingons and Fek'Ihri would wipe each other out.

In 2369 Kahless was made flesh once more, having been cloned from blood taken from his own sword. This enraged Molor, and he vowed to rise again and destroy the empire. In 2409 the Fek'Ihri emerged and struck at the heart of Qo'noS, heralding the possible return of Molor. ( “Blood of the Empire”)

The Klingons were not aware of how the Fek'Ihri were able to return. The leader of the initial invasion claimed to have crossed the oceans of blood from the shores of Gre'thor, leading the Klingon High Council to conclude that they are indeed the true Fek'Ihri from ancient legend. Others speculated that they may have been created through technological means, as with the clone of Kahless, possibly using ancient Hur'q technology, or even by the Federation. The Klingons subsequently sought the lost Sword of Kahless to defeat Molor. Doing so helped push the tide of Fek'Ihri back.

The Fek'Ihri have no culture beyond the thirst for vengeance against Kahless, and the Klingon Empire. The Horde seems to have a loose hierarchy, with leaders such as D'Jar commanding groups of subordinates. Status within the Horde seems to be based on strength, and lesser creatures are enthralled by a caste of slave masters. The lowliest ranks of the Horde seem merely to be mindless ghouls, capable only of hatred and destruction.

The Fek'Ihri have no government and there seems to be no over-arching leader. There are numerous powerful fiends asserting dominance over the Horde and over Gre'thor. Herron, the self-styled "Lord of the Dead" claims god-hood over Gre'thor and its inhabitants. Fek'lhr, the mythical guardian of Gre'thor, and arguably the most powerful among the Horde, styles himself as a force of death and chaos. Molor himself is interested only in avenging himself on Kahless, and does not concern himself with the affairs of Gre'thor or the Fek'Ihri.