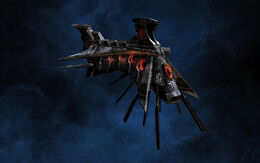 This article is about the playable starship. For the NPC vessel, see Kar'Fi Battle Carrier (Mob).

The Fek'Ihri Kar'Fi-class Battle Carrier is a Tier 5 (Level 50) Science Carrier which may be flown by characters of any faction.

Heavily based on captured Fek'Ihri ships, the Kar'Fi-class Battle Carrier is designed to punish the enemies of the Empire.

These small fighters are equipped with Antiproton Single and Dual Cannons, and can also use Ramming Speed I, allowing it to set a collision course with an enemy target, killing itself and dealing a massive blow to the enemy.

If the player owns the Fek'Ihri Fe'rang Dreadnought Carrier, they may also equip Lost Souls of Gre'thor.

The Advanced variants of these pets can be obtained from the Dilithium Store, while Elite variants are obtainable from a Fleet Starbase with an unlocked Tier V Communications Array.

By using an [Experimental Ship Upgrade Token], the Fek'Ihri Kar'Fi-class Battle Carrier may be upgraded to T5-X, unlocking an extra ship device slot, universal console slot, and the ability to slot an extra starship trait.