This article refers to the Ferengi species. You may instead be looking for the faction Ferengi Alliance 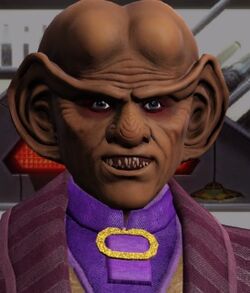 Natives of the planet Ferenginar, Ferengi culture is built on the ideals of free enterprise and profit, and there are 285 Rules of Acquisition that govern Ferengi society. They have a head for numbers. Due to recent social reforms, however, many young Ferengi are exploring the world outside of commerce. Some have joined Starfleet, where service to others is valued more than Gold-Pressed Latinum.

Ferengi are a playable race in Star Trek Online.

Ferengi are normally smaller than humans and have lifespans that can exceed a century. Ferengi have orange-brown colored skin, blue fingernails, enlarged skulls and sharp teeth. Their four-lobed brain makes them resistant to telepathy. Their large ears give them exceptionally acute hearing.