This page is about the playable ship. See D'Kora Class for the NPC vessel. 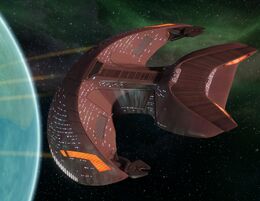 The Ferengi D'Kora-class Marauder is a Tier 5 (Level 40) Battlecruiser / Freighter hybrid which may be flown by characters of any faction.

Players can obtain this starship as a ultra rare drop from the [Ferengi Lock Box]. It was retired from the Infinity Lock Box when its Tier 6 counterpart was released. The boxed ship is not bound and so may be traded to other players or bought and sold on the Exchange for energy credits under the name [Special Requisition Pack - Ferengi D'Kora Ship].

Due to a miscalculation on the Ferengi Futures Exchange in early 2409, Urata Manufacturing found itself with an excess of inventory and mounting debt. Desperate to stabilize cash flow, the company attempted to liquidate some of its remaining assets through quiet sales. When this didn't work, the leaders of the company cooked the books, shoving most of their remaining debt onto a little-known subsidiary that specialized in military ships. Then they spun that company, Sluga Military Technology, off as an independent manufacturer.

Burdened with Urata Manufacturing's old debts, Sluga seemed doomed to failure. Its stock price dropped so low that it was delisted off of the exchange. Most of the staff abandoned the company. Liquidators were expected any day. That's when the president of the company had a revelation.

Half of the quadrant is at war, but the Ferengi Alliance is neutral. It isn't buying more ships for its military. So why not find a way to get these ships to people who need them? As the Rules of Acquisition say, war is good for business!

Armed with an unstoppable attitude and a few convenient loopholes in Ferengi law, Sluga Military Technology has teamed up with Lobi Crystal Consortium (a wholly owned subsidiary of Quark Enterprises) to put new D'Kora Marauders in the hands of ship captains on the front lines.

The D'Kora Marauder comes fully stocked for any privateer.

The D'Kora comes equipped with the [Console - Universal - Battle Module 3000].

This console is part of the Expedited Delivery Set, which also includes the Metaphasic Solar Capacitor console from the Ferengi Nandi Warship. An additional passive bonus is available after equipping both consoles.

The D'Kora comes with several onboard amenities, usually found only on social hubs or freighters.

By using an [Experimental Ship Upgrade Token], the Ferengi D'Kora-class Marauder may be upgraded to T5-X, unlocking an extra ship device slot, universal console slot, and the ability to slot an extra starship trait.