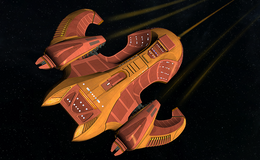 The Ferengi Nandi-class Warship is a Tier 6 Warship / Freighter hybrid which may be flown by characters of any faction. This starship can be used from any level upon completion of the tutorial experience. As you level up, this ship gains additional hull, weapon slots, and console slots.

Players can obtain this starship from the Phoenix Prize Pack, for 1 [Epic Prize Token - Phoenix Prize Pack]; this ship box cannot be sold or traded. Those who obtained it from a previous (2015, PC) Lohlunat Festival event for 1000 Lohlunat Prize Vouchers may find this vessel in the “Reclaim Rewards” store, accessible via the "Events" UI.

On Console, this vessel has been given away for free on two occasions. The first giveaway occurred during the launch of Season Thirteen: Escalation in June 2017, and was limited to one character per account. The second giveaway occurred during the 9 Year Anniversary Event in March 2019, where all characters on an account could unlock the vessel (but no account unlock took place.)

Developed by the Lobi Crystal Consortium (a wholly-owned subsidiary of Quark Enterprises) under contract for the Risian Hospitality Association, the Ferengi Nandi Warship offers the finest in both firepower and luxury for the discerning ship commander. Featuring expanded science bridge officer seating as well as tactical improvements over other Ferengi warships, the Nandi is durable, stylish and extremely desirable. Impress your enemies with the vastness of your wealth before you blow them into scrap!

This console is part of the Expedited Delivery Set.

The Nandi utilizes the existing D'Kora Bridge from the Ferengi D'Kora Marauder. This interior has a number of onboard features not available on ship classes other than the Tuffli Class Freighter and Suliban Cell Ship. The ship's owner can access them by selecting "Visit Starship Bridge" on the dropdown menu, and once onboard, can share them with friends by sending Bridge Invitations.

By using an [Experimental Ship Upgrade Token], the Ferengi Nandi-class Warship may be upgraded to T6-X, unlocking an extra ship device slot, universal console slot, and the ability to slot an extra starship trait.