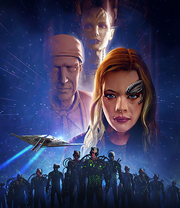 First Contact Day, is an in-game Event which occurs in early April, to coincide with the canonical First Contact between Humans and Vulcans on April 5, 2063 following the successful test of the Phoenix (humanity's first warp drive) by Zefram Cochrane. The in-game celebration of First Contact Day varies from year to year, and it has not been officially observed every year. 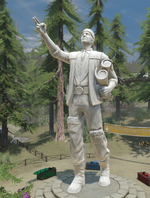 A statue of Doctor Zefram Cochrane, the inventor of Humanity's first warp engine; the test of which triggered first formal contact between Humanity and another species

For Humans this typically included a day off with low key observance of the event. By 2409 President Aennik Okeg presided over reenactment events where individuals would construct model recreations of the Phoenix. However, celebrations in 2385 were marred by a Synth attack on Mars.

While not known until the late 24th century, the Borg had travelled back and attempted to intervene to prevent First Contact and assimilate Earth (due to the seminal role that Earth played in the formation of the Federation). Similar incursions have since been attempted and prevented.

In 2013 and 2014, the KDF and Romulan Republic factions had equivalent celebrations on the same day termed the Day of Honor and Republic Day respectively. While Day of Honor is an establish Klingon holiday, it was not previously stated to have occurred parallel to First Contact Day and was added to give some equivalency to Klingon characters. The Republic Day was invented to fulfill a similar role for the Romulans. These days have not been cited since 2014 with the focus renewed on First Contact.