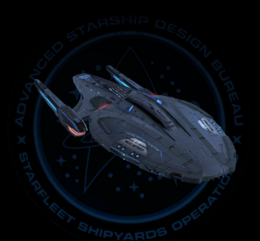 The Fleet Avenger-class Battlecruiser (T6) is a Tier 6 Battlecruiser which may be flown by Starfleet characters, including Federation-aligned Romulan Republic and Dominion characters. All faction restrictions of this starship can be removed by having a level 65 KDF character or by purchasing the Cross Faction Flying unlock from the Zen Store. This starship can be used from any level upon completion of the tutorial experience. As you level up, this ship gains additional hull, weapon slots, and console slots.

, so long as the player's Fleet has a Tier IV Shipyard and one Starbase Military Fleet Ship Provision. If the player already owns the Arbiter Battlecruiser from the Zen Store, the Fleet Ship Module cost is reduced to 1.

The Tier 6 Fleet Battlecruiser is based upon the Avenger-class Battlecruiser's design. This upgraded starship was designed from the ground up to be durable enough to combat the Iconian threat while still being able to deliver punishing amounts of damage. The Tier 6 Fleet Battlecruiser has been specifically designed to support your Fleet. Fleet Starships are built to the highest standard and have increased Hull Hit Points, Shield Strength and an additional Console slot.

This ship can also equip the [Console - Universal - Cloaking Device] console obtainable from either the Galaxy Dreadnought Cruiser or Defiant Tactical Escort Retrofit.

By using an [Experimental Ship Upgrade Token], the Fleet Avenger-class Battlecruiser (T6) may be upgraded to T6-X, unlocking an extra ship device slot, universal console slot, and the ability to slot an extra starship trait.

Note that upgrading the Arbiter Battlecruiser, the standard non-fleet version of the Fleet Avenger Battlecruiser (T6), will not apply the upgrade to this starship.