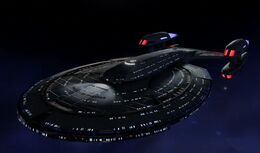 This article is about the T5 playable starship. For the improved T6 version, see Fleet Manticore Heavy Destroyer. For other uses, see Chimera class.

The Fleet Chimera-class Heavy Destroyer is a Tier 5 (Level 50) Destroyer which may be flown by Starfleet characters. All faction restrictions of this starship can be removed by having a level 65 KDF character or by purchasing the Cross Faction Flying unlock from the Zen Store.

Players can obtain this starship from any Ship and Shuttle Requisitions officer if they are a 1000-day Veteran or a lifetime subscriber for 20,000

, so long as the player's Fleet has a Tier V Shipyard and one Starbase Military Fleet Ship Provision.

Starfleet Corps of Engineers (SCE) has been working on a special new destroyer class starship, designed for high-level combat situations. The project was so secret that access to the Utopia Planitia shipyard was restricted for months while the project was completed. Now, Starfleet Command has decided to offer ships of this class to its most experienced captains. When in Sector Space, the Chimera's pylons angle upwards, like those of the Intrepid class and its sister classes.

The Fleet Chimera-class Heavy Destroyer comes with an Experimental Weapon slot. This additional slot does not fit standard weapons. Unlike standard starship weapons, Experimental weapons are not affected by weapon firing modes, such as those granted by bridge officer abilities.

By using an [Experimental Ship Upgrade Token], the Fleet Chimera-class Heavy Destroyer may be upgraded to T5-X, unlocking an extra ship device slot, universal console slot, and the ability to slot an extra starship trait.