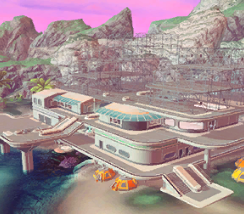 Dranuur Prime, The Fleet Colony World is a Lukari-Kentari themed fleet holding located in the Dranuur System, located in the Antos Sector of the Alpha Quadrant. It provides similar amenities as the Fleet Starbase, including mail, exchange, and bank terminals. Additionally, it is notable for being the first full five-tier holding since the Fleet Holding system was introduced.

The following missions can be performed once an hour:

The Dranuur Colony also appears in the following missions:

Colony World holding features 5 tiers and 3 departments (Morale, Infrastructure and Renewable Energy), similar to the Fleet Starbase advancement process. The colony world primary track and its sub-tracks progress through the tiers by gaining XP in these categories. This is achieved by completing fleet projects requiring large amounts of various resources which can be contributed by all members of a fleet.

Unlike other fleet holdings, Colony World provisions can't be purchased from the replicator, but are instead available from the mini-games and missions mentioned in the section above.