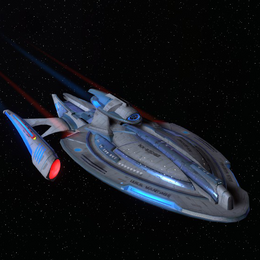 This article is about the playable starship. For other uses, see Luna class.

The Fleet Comet-class Reconnaissance Science Vessel is a Tier 5 (Level 50) Science Vessel which may be flown by Starfleet characters, including Federation-aligned Romulan Republic and Dominion characters. All faction restrictions of this starship can be removed by having a level 65 KDF character or by purchasing the Cross Faction Flying unlock from the Zen Store.

The Reconnaissance Science Vessel, shortened as the "Recon vessel" or "RSV", is one of the newer line of Federation scientific starships and was built not long after the Dominion War had ended, with the purpose of exploration and research. One notable vessel of the Recon line (or more specifically the Luna class) is the USS Titan. These vessels are quite maneuverable due to a high turn rate and inertia rating. Also of note, all Recon Science Vessels can mount a "Mission Pod" through the starship customization in-game.

By using an [Experimental Ship Upgrade Token], the Fleet Comet-class Reconnaissance Science Vessel may be upgraded to T5-X, unlocking an extra ship device slot, universal console slot, and the ability to slot an extra starship trait.