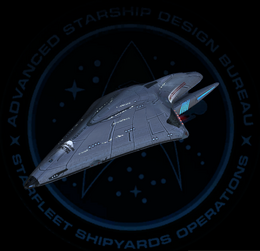 The Fleet Dauntless-class Experimental Science Vessel is a Tier 6 Science Vessel which may be flown by Starfleet characters, including Federation-aligned Romulan Republic and Dominion characters. All faction restrictions of this starship can be removed by having a level 65 KDF character or by purchasing the Cross Faction Flying unlock from the Zen Store. This starship can be used from any level upon completion of the tutorial experience. As you level up, this ship gains additional hull, weapon slots, and console slots.

, so long as the player's Fleet has a Tier III Shipyard and one Starbase Military Fleet Ship Provision. If the player already owns the Dauntless Experimental Science Vessel from the Zen Store, the Fleet Ship Module cost is reduced to 1.

The original Dauntless class science vessel, discovered by the crew of the Voyager, was actually alien in origin. It featured Quantum Slipstream Drive technology, which was groundbreaking at the time, but ultimately this ship was created using Particle Synthesis to fool and trap the crew of the Voyager. In 2410 the blueprints for the original alien starship were closely examined and Starfleet Engineering Corps were able to re-create this impressive science vessel.

The Fleet Experimental Science Vessel has been specifically designed to support your Fleet. Fleet Starships are built to the highest standard and have increased Hull Hit Points, Shield Strength and an additional Console slot.

Sleek and bullet-shaped, Dauntless class is roughly half the size of Voyager. Although created by alien technology, the ship was modified to resemble Federation starships on the interior and exterior by the means of particle synthesis. In 2410, Starfleet Engineers created the Experimental Science Class based on its design.

The Hyper Advanced Quantum Slipstream Drive ability allows the Fleet Experimental Science Vessel to travel at Warp 23 for 60 seconds instead of the normal 30 seconds in sector space, and with twice the turn rate.

By using an [Experimental Ship Upgrade Token], the Fleet Dauntless-class Experimental Science Vessel may be upgraded to T6-X, unlocking an extra ship device slot, universal console slot, and the ability to slot an extra starship trait.