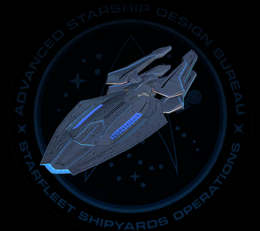 The Fleet Eclipse-class Intel Cruiser is a Tier 6 Battlecruiser which may be flown by Starfleet characters, including Federation-aligned Romulan Republic and Dominion characters. All faction restrictions of this starship can be removed by having a level 65 KDF character or by purchasing the Cross Faction Flying unlock from the Zen Store. This starship can be used from any level upon completion of the tutorial experience. As you level up, this ship gains additional hull, weapon slots, and console slots.

, so long as the player's Fleet has a Tier II Shipyard and one Starbase Military Fleet Ship Provision. If the player already owns the Eclipse Intel Cruiser from the Zen Store, the Fleet Ship Module cost is reduced to 1.

The Eclipse is quite nimble for a starship of its class, it sacrifices little structural integrity for this benefit. It features a Cloaking Device and Active Sensor Arrays. The former allows the starship to cloak while not in combat, and the latter allows intel craft to gather information about their target to expose a vulnerability in their defenses. It can utilize the Intelligence bridge officer powers and other abilities described below.

Designed to conduct covert missions and intelligence-gathering in hostile space, the Eclipse's basic hullform is both essentially similar to, yet dramatically different from, the classic profile of Starfleet cruisers.

The Fleet Eclipse-class Intel Cruiser has been specifically designed to support your Fleet. Fleet Starships are built to the highest standard and have increased Hull Hit Points, Shield Strength, and an additional Console slot.

Despite its name, this starship is a Battlecruiser rather than a standard Cruiser.

The Fleet Eclipse does not come with a universal consoles, but it can equip and utilize the [Console - Universal - Structural Integrity Field Siphon] from the standard Eclipse-class Intel Cruiser.

As an Intelligence starship, the Fleet Eclipse Intel Cruiser is capable of deploying an Intel sensor drone with the Gather Intelligence ability.

The Fleet Eclipse-class Intel Cruiser has a cloak that allows the ship to cloak when not in combat, granting stealth and a damage bonus upon decloaking.

By using an [Experimental Ship Upgrade Token], the Fleet Eclipse-class Intel Cruiser may be upgraded to T6-X, unlocking an extra ship device slot, universal console slot, and the ability to slot an extra starship trait.