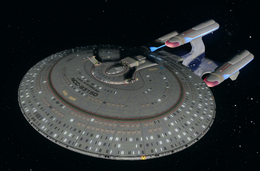 You may be looking for the NPC version of the Galaxy Dreadnought Cruiser.

The Fleet Galaxy-class Dreadnought Cruiser (T6) is a Tier 6 Dreadnought Cruiser which may be flown by Starfleet characters, including Federation-aligned Romulan Republic and Dominion characters. All faction restrictions of this starship can be removed by having a level 65 KDF character or by purchasing the Cross Faction Flying unlock from the Zen Store. This starship can be used from any level upon completion of the tutorial experience. As you level up, this ship gains additional hull, weapon slots, and console slots.

, so long as the player's Fleet has a Tier IV Starbase Shipyard and one Starbase Military Fleet Ship Provision. If the player already owns the Yamato Dreadnought Cruiser from the Zen Store, the Fleet Ship Module cost is reduced to 1.

The Fleet Galaxy Dreadnought Cruiser (T6) comes with a built-in Phaser Spinal Lance. This is a devastating weapon, the Romulan counterpart is equipped on the Kara Advanced Warbird, and the Klingon counterpart is equipped on the Kolasi Siege Destroyer. The Yamato can also equip a cloaking device from the Dreadnought Cruiser, and the saucer separation console from the Exploration Cruiser Retrofit.

By using an [Experimental Ship Upgrade Token], the Fleet Galaxy-class Dreadnought Cruiser (T6) may be upgraded to T6-X, unlocking an extra ship device slot, universal console slot, and the ability to slot an extra starship trait.