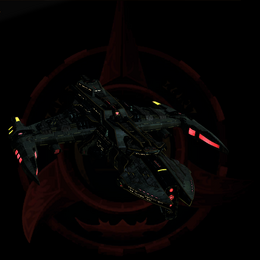 The Fleet Mogh-class Battlecruiser (T6) is a Tier 6 Battlecruiser which may be flown by Klingon Defense Force characters, including Klingon Empire-aligned Romulan Republic and Dominion characters. All faction restrictions of this starship can be removed by having a level 65 KDF character or by purchasing the Cross Faction Flying unlock from the Zen Store. This starship can be used from any level upon completion of the tutorial experience. As you level up, this ship gains additional hull, weapon slots, and console slots.

, so long as the player's Fleet has a Tier IV Shipyard and one Starbase Military Fleet Ship Provision. If the player already owns the Kurak Battlecruiser from the Zen Store, the Fleet Ship Module cost is reduced to 1.

Several teams of engineers have been working on iterations of the Klingon Defense Force's battlecruiser technology. One team, led by Ambassador Worf, developed a smaller, more nimble ship intended to combat enemies who rely on speed as a defense. In honor of his contributions to the project, Ambassador Worf was allowed to name the new starship class. He chose the name "Mogh" in honor of his father, a Klingon warrior who died in the Khitomer massacre of 2346.

The Mogh-class Battlecruiser is more offensively focused than the Negh'Var-class Heavy Battlecruiser, but slightly less durable. It was designed with versatility in mind and offers a balance between offense and defense.

The Kurak-class Battlecruiser is based upon the Mogh Battlecruiser's design. This starship was designed from the ground up to be durable enough to combat the Iconian threat while still being able to deliver punishing amounts of damage.

Klingon Empire Fleets have made further upgrades to the Kurak-class Battlecruiser. These Fleet Starships are built to the highest standard and have increased Hull Hit Points, Shield Strength and an additional Science Console slot.

However, it can equip [Console - Universal - Dynamic Defense Deployment System] and [Console - Universal - Ablative Hazard Shielding] which form the Deadly Maneuvers Set. These consoles are obtainable with Mogh Battle Cruiser (T5) and Kurak Battlecruiser (T6), but can also be equipped on the Fleet Mogh Battlecruiser (T6). For each console added after the first, an additional passive bonus is unlocked.

The Dynamic Defense Deployment System functions differently depending upon which Cruiser Command has been activated:

The Fleet Mogh-class Battlecruiser (T6) has a cloak that allows the ship to cloak when not in combat, granting stealth and a damage bonus upon decloaking.

By using an [Experimental Ship Upgrade Token], the Fleet Mogh-class Battlecruiser (T6) may be upgraded to T6-X, unlocking an extra ship device slot, universal console slot, and the ability to slot an extra starship trait.

Note that upgrading the Kurak Battlecruiser, the standard non-fleet version of the Fleet Mogh Battlecruiser (T6), will not apply the upgrade to this starship.