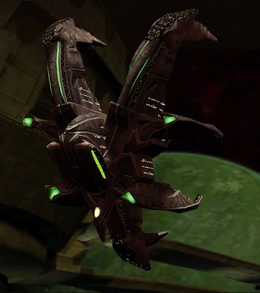 This article is about the playable starship. For the NPC vessel, see Guramba Siege Destroyer (Mob).

The Fleet Nausicaan Guramba-class Siege Destroyer is a Tier 6 Destroyer which may be flown by Klingon Defense Force characters, including Klingon Empire-aligned Romulan Republic and Dominion characters. All faction restrictions of this starship can be removed by having a level 65 KDF character or by purchasing the Cross Faction Flying unlock from the Zen Store. This starship can be used from any level upon completion of the tutorial experience. As you level up, this ship gains additional hull, weapon slots, and console slots.

, so long as the player's Fleet has a Tier IV Shipyard and one Starbase Military Fleet Ship Provision. If the player already owns the Nausicaan Kolasi Siege Destroyer from the Zen Store, the Fleet Ship Module cost is reduced to 1.

However, it can equip [Console - Universal - Supplemental Subsystems] obtainable with the Nausicaan Kolasi Siege Destroyer.

The Fleet Nausicaan Guramba Siege Destroyer lacks a cloaking device, but instead has other integrated abilities.

This starship has a single hangar bay equipped with Nausicaan Stinger Fighters. These shuttles are armed with Disruptor Pulse Cannons and Photon Torpedoes.

The Fleet Nausicaan Guramba-class Siege Destroyer comes with an Experimental Weapon slot. This additional slot does not fit standard weapons. Unlike standard starship weapons, Experimental weapons are not affected by weapon firing modes, such as those granted by bridge officer abilities.

By using an [Experimental Ship Upgrade Token], the Fleet Nausicaan Guramba-class Siege Destroyer may be upgraded to T6-X, unlocking an extra ship device slot, universal console slot, and the ability to slot an extra starship trait.