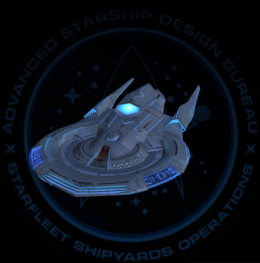 The Fleet Scryer-class Intel Science Vessel is a Tier 6 Science Vessel which may be flown by Starfleet characters, including Federation-aligned Romulan Republic and Dominion characters. All faction restrictions of this starship can be removed by having a level 65 KDF character or by purchasing the Cross Faction Flying unlock from the Zen Store. This starship can be used from any level upon completion of the tutorial experience. As you level up, this ship gains additional hull, weapon slots, and console slots.

, so long as the player's Fleet has a Tier II Shipyard and one Starbase Military Fleet Ship Provision. If the player already owns the Scryer Intel Science Vessel from the Zen Store, the Fleet Ship Module cost is reduced to 1.

The Fleet Scryer Intel Science Vessel has been specifically designed to support the Alliance Fleet. Fleet Starships are built to the highest standard and have increased Hull Hit Points, Shield Strength and an additional Console slot; in the Fleet Scryer's case, it is a Tactical Console slot.

Tasked with high-risk surveillance, data collection, and combat support missions in the middle of hostile space, the Scryer Science Vessel sports a highly unusual profile. In its default configuration, the Scryer's primary hull is not a saucer but a ring, with hollow space separating an outer concentric hull from a smaller inner saucer. This layout is vaguely reminiscent of the inner ring and promenade structure of the Deep Space Nine space station, though obviously on a much smaller, more mobile scale.

The outer ring holds specialized equipment, recessed weapon mounts, and the Scryer's formidable active sensor array, while the inner saucer contains the bridge and living quarters. Both hulls blend into a tapered secondary hull that features long, low-profile baffled warp nacelles. The main deflector dish is located in a pod-like structure atop the secondary hull, which also houses the Scryer's active sensor probes and probe swarms.

The ship's basic hull material is black, with no visible windows, rendering the Scryer difficult to see against the background of space, if not for thin, blue running light strips and the bright deflector.

As an Intelligence starship, the Fleet Scryer Intel Science Vessel is capable of deploying an Intel sensor drone with the Gather Intelligence ability.

The Fleet Scryer-class Intel Science Vessel has a cloak that allows the ship to cloak when not in combat, granting stealth and a damage bonus upon decloaking.

By using an [Experimental Ship Upgrade Token], the Fleet Scryer-class Intel Science Vessel may be upgraded to T6-X, unlocking an extra ship device slot, universal console slot, and the ability to slot an extra starship trait.