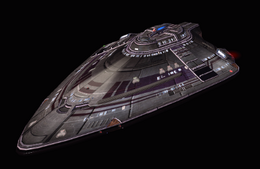 The Prowler Destroyer is a powerful, compact capital ship that forms the backbone of the Tzenkethi Coalition navy. It comes in two visually identical variants that are comparable to Reman Resistance warbird escorts. It is difficult to detect while traveling at warp, but unlike its smaller brethren the Ripper Corvette and Pouncer Strike Fighter it cannot actively mask its presence at sublight speed.

In “Bait and Switch, Part II” a group of these destroyers attacks the player as part of a Tzenkethi battle squadron under the command of Tivahr Desh Zen-C.