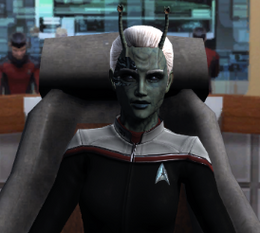 Captain Four of Ten is a Liberated Borg Andorian commanding the U.S.S. Victory. She serves as a mission giver for Starfleet players on the Borg Front. Federation players will also interact with her during the daily Borg Invasion missions in the various other sector blocks.