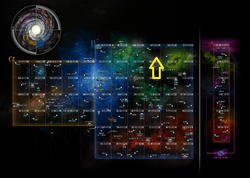 The Fvillhaih System is a system located in the Lirss Sector of the Beta Quadrant.

A Class-F dwarf star orbited by two planets. Fvillhaih I is a gas supergiant, while the much smaller Fvillhaih II is a Class-C world covered with a thick layer of volcanic ash. Surveys have shown that Fvillhaih II was a Class-B world approximately 100,000 years ago, and that the thousands of volcanoes on the planet went dormant as the planet cooled.