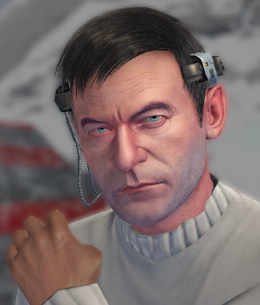 You may be looking for his Prime universe counterpart, Gabriel Lorca.

Gabriel Lorca was a Terran attempting a coup against the Emperor. In a transporter accident above Priors World, he was swapped with his Prime Universe counterpart and assumed his identity. In that, he continued to serve in his counterpart's stead as captain of the U.S.S. Buran during the Klingon War, later assuming command of the U.S.S. Discovery which aided his return to the Mirror universe.