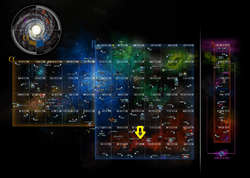 The Ganalda System is located in the Archanis Sector and contains the Klingon Ganalda Space Station.

Ganalda boasts an advanced orbital base that serves as a rally point for Klingon fleet forces near the neutral zone. Ganalda IV hosts a Klingon colony world and subjugated indigenous populace.

"Ganalda" was shown in the book Star Trek Star Charts. Aside from that, only "Ganalda IV" was mentioned in canon and licensed products. Based on these references and taking into account the system's placing in the Archanis Sector in Star Trek Online, the Ganalda system was heavily involved in recurring conflicts between the Klingon Empire and the Federation over the 23rd and 24th centuries.

The game does not clearly state whether the planet around which Ganalda Space Station orbits is Ganalda IV or another planetary body of the system.